Google’s Penguin algorithm targets websites with low-quality, spammy links that are inbound. In theory, the algorithm makes sense, punishing those who have engaged in attempting to boost rank using crappy links. I’m not referring to low-quality links, but pure spam, like this page on Blogspot. 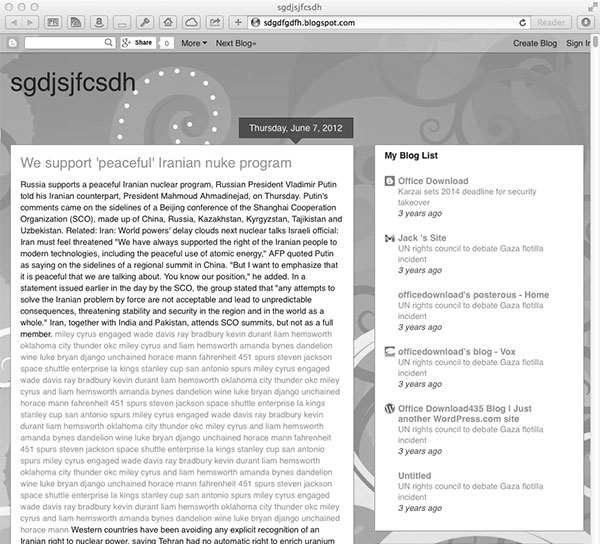 Prior to Penguin, bad links had little effect either way. Bad links, as determined by Google, has no detrimental affect on a website. They changed the game when the Penguin algorithm launched and as a result, forums are among those who can suffer collateral damage.

When people think forum spam, signature links are usually the first topic of discussion. Outbound links are votes from your site for another site. A spammer would sign up and add their signature. Some would try to increase the visibility of their account by making a few posts, before leaving. Most administrators and moderators can easily spot these and snuff them out. If a spammer came back a month later to update their signature, it made it difficult to spot. When I migrated from vBulletin a few years back, I remember spending literally 3 days deleting links. Most forums have gotten wise to this strategy, simply disabling signatures to guests. The practice of signature spam still exists, but for the most part, sites have adapted.

Somewhere along the line, efforts started to boost the value of a particular profile or post by creating backlinks. These can be other forums, free blogs, garbage directories filled with Viagra ads and off-brand social networks. The same exact low-quality, spammy links that can make you a target for Google’s Penguin. It isn’t sufficient enough to ban a user and delete their spammy signature. They gain no value from your site because the link has been removed. What remains however are backlinks to their profile or post.

We had a member who signed up and inquired about a company called Simply Sellular, a company that buys used phones. Sounds plausible. Gazelle, Amazon and others have trade-in programs, so it’s not as if this were off topic. As moderators, we had no way of knowing the motives of the person posting and more importantly, what was happening offsite.

For the record, I’ve never particularly cared about Penguin, never thought I had a reason to care about spammy backlinks. My focus was removing links that left my forum and my house was in order, or so I thought. When I noticed a dip around May 22nd, my role as a forum administrator changed. It didn’t matter that I wasn’t on offense when it came to building links. Google now expects me to play defense.

Using MajesticSEO and Google’s Webmaster Tools, I found hundreds of links to a single forum thread. Hundreds of low-quality, spammy backlinks of which I had zero control over. Forget about this site, which is scraping multiple iPhone sites and being rewarded with an indexation of over 2 million pages. GWT still shows hundreds of thousands of backlinks from them, despite having all of our content removed upon filing a DMCA request. It set forth in motion a plan to remove and disavow crappy links. I include among those directories that we submitted to years ago, when that was a practice which was acceptable and included high quality sites like Best of the Web and Yahoo. To this day, I don’t think these had any negative impact, but fear and traffic drops will make you take extreme measures. When using the disavow tool, Matt Cutts suggests you should use it like a machete and not a fine toothed comb.  Instead of spending time writing and building great content, machete in hand, I started the long and arduous process of attempting to cleanse my backlink profile. What I found was shocking.

The practice of building spammy backlinks went well beyond Simply Sellular. I was finding all sorts of free blogs that were linking to forum profiles. Google’s very own Blogspot seems to be a popular one. I find it incredibly disturbing that Google cannot keep their own house in order and they are the company behind the algorithm penalizing other sites.

It doesn’t matter that links were removed on our end or hidden to guests. Site owners are now responsible for incoming links. For someone who hasn’t built a link in years, I’ve spent months cleaning up a mess created by others. Instead of the cloak and dagger stuff, why not provide site owners with a guide on how to maintain sites, how to maintain forums. Google’s Penguin is well intentioned, but is woefully incapable of preventing collateral damage, putting forums above all, at risk.